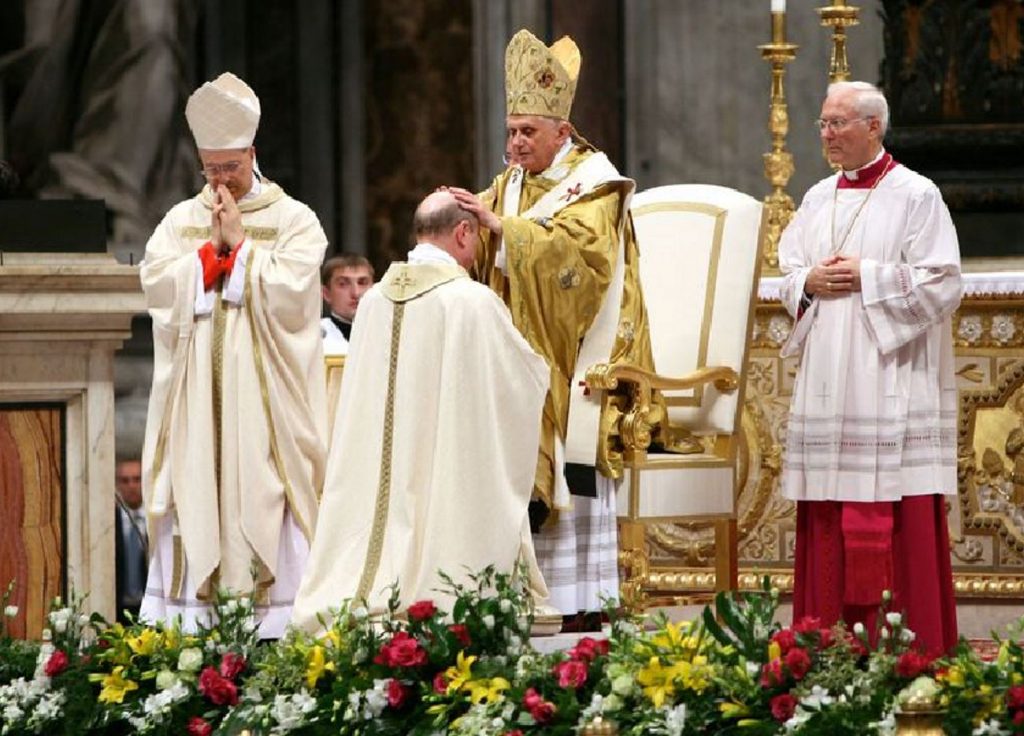 “Ordination” comes from the Latin word ordinatio, which means to incorporate someone into an order. In the Sacrament of Holy Orders, a man is incorporated into the priesthood of Christ at one of three levels: the episcopate, the priesthood, or the diaconate.

The Priesthood of Christ:
The priesthood was established by God among the Israelites during their exodus from Egypt. God chose the tribe of Levi as priests for the Hebrew nation. The primary duties of the Levite priests were the offering of sacrifice and prayer for the people.
Jesus Christ, in offering Himself up for the sins of all mankind, fulfilled the duties of the Old Testament priesthood once and for all. But just as the Eucharist makes Christ’s sacrifice present to us today, so the New Testament priesthood is a sharing in the eternal priesthood of Christ. While all believers are, in some sense, priests, some are set aside to serve the Church as Christ Himself did.

Eligibility for the Sacrament of Holy Orders:
The Sacrament of Holy Orders can be validly conferred only on baptized men (https://www.learnreligions.com/woman-as-priest-in-catholic-church-542111) , following the example set by Jesus Christ and His Apostles, who chose only men as their successors and collaborators. A man cannot demand to be ordained; the Church has the authority to determine who is eligible to receive the sacrament.

The Form of the Sacrament of Holy Orders:
As the Catechism of the Catholic Church notes (para. 1573):

The essential rite of the sacrament of Holy Orders for all three degrees consists in the bishop’s imposition of hands on the head of the ordinand and in the bishop’s specific consecratory prayer asking God for the outpouring of the Holy Spirit and his gifts proper to the ministry to which the candidate is being ordained.
Other elements of the sacrament, such as holding it in the cathedral (the bishop’s own church); holding it during Mass; and celebrating it on a Sunday are traditional but not essential.

The Ordination of Bishops:
There is only one Sacrament of Holy Orders, but there are three levels to the sacrament. The first is that which Christ Himself bestowed upon His Apostles: the episcopate. A bishop is a man who is ordained to the episcopate by another bishop (in practice, usually by several bishops). He stands in a direct, unbroken line from the Apostles, a condition known as “apostolic succession.”
Ordination as a bishop confers the grace to sanctify others, as well as the authority to teach the faithful and to bind their consciences. Because of the grave nature of this responsibility, all episcopal ordinations must be approved by the Pope.

The Ordination of Priests:
The second level of the Sacrament of Holy Orders is the priesthood. No bishop can minister to all of the faithful in his diocese, so priests act, in the words of the Catechism of the Catholic Church, as “co-workers of the bishops.” They exercise their powers lawfully only in communion with their bishop, and so they promise obedience to their bishop at the time of their ordination.

In the Eastern Churches, both Catholic and Orthodox,   (the permanent diaconate has been a constant feature. In the West, however, the office of deacon was for many centuries reserved to men who intended to be ordained to the priesthood. The permanent diaconate was restored in the West by the Second Vatican Council. Married men are allowed to become permanent deacons, but once a married man has accepted ordination, he cannot remarry if his wife dies.